Dad – A Pic Before the Poisoning

Alfie’s Entry: Rummaging through a box of old photos, I found this pic of Dad taken April 1989, just 5 months before he was poisoned on September 13, 1989.  This picture was taken on a Saturday at his townhouse in Napoleonville, LA.  We spent the weekend at Dad’s place.  (Side note: Our dad had his own place in Napoleonville because he was in the process of establishing his new practice in Napoleonville after practicing in Larose for nearly 10 years).  Sporting his brand new apple red Audi 90 Sport, we cruised to the hospital with him so he can make his rounds for the day.  Dad was always proud of his new toys.  After waiting for him to do his rounds at the hospital, he wanted us to take pics next to the car.  We were eager to get back to his townhouse so that we could pull out our singing machine and his keyboard (in the background of this pic) and spend an afternoon with our dad singing and playing the keyboard.  I really believe that outside his passion for being a doctor and his family, the next important thing in his life was music.  I’ll post a video of him singing his favorite song, My Way, in the near future. 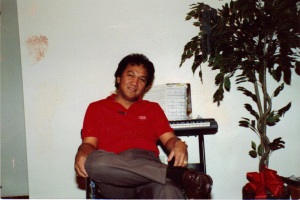 Posted by Alfie Seludo Adona on March 5, 2011 in Blog Entry